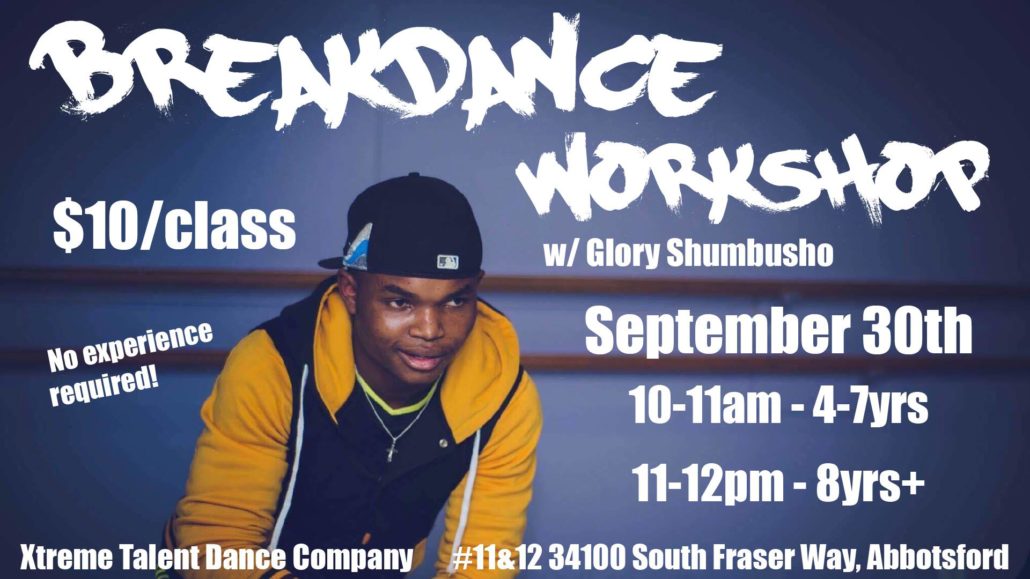 Open to EVERYONE! Not just XTDC students!

Glory Shumbusho a 22years old was born in the Republic Democratic of Congo, in 1995. He moved to Rwanda when he was 7 years old, then Moved back to Congo after 2 years. In 2007 he moved to Uganda, where he learned the fundamental elements of Breakdance. He was taught by breakdance project Uganda, once every two weeks for 4 months. Later on he started self teaching, from watching other dance. In 2013 Glory moved to Canada, he found it hard to practice his dance moves since it was too cold in the winter and spring. Then in summer of 2014, he started training in his driveway on a piece of cardboard. In September 2015 Glory got a job to teach breakdance at Inspiration school of dance and fine arts. Later on that year, he auditioned for the BC Summer games dance Crew, and he was selected. Glory, performed in the torch light ceremony, opening, and closing ceremony, he also performed on Canada day in Abbotsford with his summer games crew the “Elementz dance crew”. He also teaches at Chilliwack dance School, Glory hold a level international dance teaching certificate. Glory is a soccer players and coach, he coach. He can speak 6 languages, he is also a founder and director of Breakdance Project Chilliwack (BPC) a non profit organization, that he used to empower youths, and kids through hip-hop/ breakdance. He is going to school to become a social worker too.